Miha brings 18 years of grappling experience and a Slovenian flavor to Legion Jiu Jitsu. He is currently a black belt in judo and black belt in jiu jitsu. Miha was born far away from San Diego in Kranj, Slovenia. He grew up under and in the Alps trying a variety of sports during his childhood. Around the age of 9 or 10, he began training judo in his hometown.

During his mid-teen years, he trained with the Slovenian Olympic judo team, which has produced 5 Olympic medals since 2004, with 2 golds. Despite training at such a high level and intensity, he didn’t want to continue with judo. There were a number of reasons, the main one being the constant changing of the rules that made judo a less complete martial art.

At age 18 Miha joined a local MMA club with dreams to become an accomplished MMA fighter. That journey lasted 3-4 years during which Miha cleaned out the local amateur MMA scene, amassing a record of 12-1 with 11 first-round finishes (mostly submissions).

More importantly, the MMA club also offered jiu jitsu as a part of the curriculum and after 4 years of training both Miha decided to not get punched in the head for a living.

During his jiu jitsu journey, Miha moved out of Slovenia where the scene was very small as the country itself. His path took him to Warsaw, Poland; Oslo, Norway, and Dublin, Ireland.

While living abroad Miha started competing all over Europe, eventually reaching the World Championships in Los Angeles and Abu Dhabi as well. During this run, he amassed 5 IBJJF Nogi European medals, including 3 silvers. He also won multiple IBJJF Open competitions, getting the coveted Double Gold in a couple of those outings.

After a few years of living and training in Dublin, Miha and his wife Emma began a 2-year long around-the-World trip, which literally took them around the World three times. But that’s a story for a different web page.

This trip gave Miha the chance, to train and teach jiu jitsu in many different cities and countries and also allowed him to sharpen his skills by competing internationally. This led to him claiming some very exotic title, such as the 2018 New Zealand Nogi Absolute Champion.

The present
Recently Miha relocated to sunny San Diego at the invitation of Legion’s Head Instructor Keenan Cornelius and started instructing here at Legion HQ, offering his vast experience to our members. How can you learn from Miha?

Just like many of our instructors, Miha is available for private lessons. However, due to other obligations, he does only  5-6 private lessons per month. Miha also teaches some of our classes.

You can learn Miha's judo and jiu jitsu tricks from anywhere, all you need is a phone and internet.
LEARN MORE

Learn more about our other instructors: 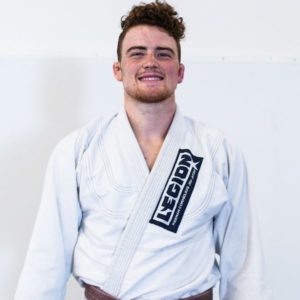